October 01, 2019
Former South African golfer and career Grand Slam winner Gary Player on Tuesday heaped praise on Prime Minister Imran Khan and hailed him as a hero, according to a video message shared by the Pakistan Tehreek-e-Insaf on the social networking website Twitter. 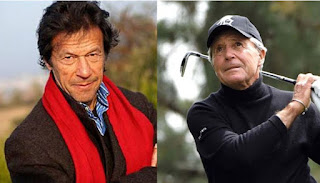 Gary Player holds the record for winning several major golf championships and was the first non-American to win all the four majors in his career, known as the career grand slam. He is still regarded as one of the all-time great golf players. In the video message, Player can be seen sitting in the car with an unidentified man, lavishing lots of praise on the leadership of PM Imran, and seemingly lost for words to describe his admiration for the former Pakistani cricketer.
“I’ve been following your leadership now. I wish I had the words of Shakespeare or Winston Churchill to give you the credit that you deserve,” says the retired South African golfer in the video message.
“I’m so proud of you for what you’re doing for your region. May Allah be with you all the time! God bless my friend. You are my hero as Nelson Mandela was…,” said the retired golfer.

“May strength be with you! I know you’ve got many many challenges that you would need at least two years, I would imagine, to get your message across. But until then Allah-o-Akbar,” he added.